News after the close is that Gilead’s COVID treatment is showing very encouraging early results. Equity futures are screaming higher (3+% as I type). That’s hugely encouraging news that is absolutely worth celebrating!!

Now, in terms of the economy, and the markets beyond this evening’s optimism, we still have to contend with the likes of the following.

From a note to employees by United Airlines (-11% today) CEO:

“…we expect demand to remain suppressed for the remainder of 2020 and likely into next year.”

The credit mess we’ve been warning about for over a year is quickly bubbling to the surface: For example, Neiman Marcus missed two loan payments yesterday, Marriott is asking lenders to waive covenants before they make good on their loans. The restaurant industry is exhibiting huge stress as yields on bonds issued by the major names are spiking.

In terms of small businesses, in just 2 weeks all of the funding approved for the paycheck protection program has been claimed; I’m sure there’ll be an increased allocation to come shortly. This just illustrates the degree of pain in the real economy…

Save only for currency basis swaps, all of our credit stress indicators deteriorated today.

As for the quality of the equity market rally of late; the up days, virtually without exception, have been met with below average volume and, in many cases, relatively weak breadth.

The below, from our daily checklist, represents some of the key indicators we track daily in credit markets, and the end of day volume and breadth data for equities. The color-coding tells today’s story:  click to enlarge… 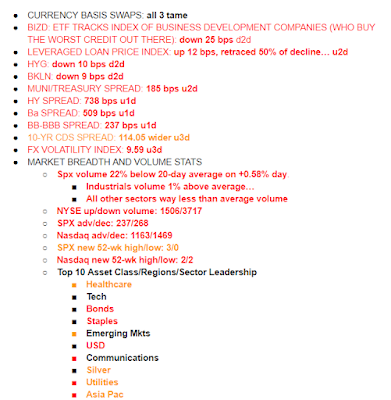 In terms of equities specifically, the S&P 500 finished higher today, but on volume that was 22% below average; with NYSE down volume nearly 2.5 times up volume, with S&P advancers vs decliners nearly a wash, and with the Nasdaq seeing more shares declining vs rising.

Tomorrow will be interesting, as we’ll be looking to see, first of all, if this evening’s big rally in futures holds (you’d think it would), and then to assess its quality within the context of volume, breadth, sector leadership, etc..

RealVision analyst Roger Hirst offers up his perspective on what has U.S. equities so detached from economic reality:

“The more the Fed does, the more attractive the U.S. becomes. Think about what’s happened over the last month; the Fed’s balance sheet has expanded by 1.8 trillion, after today it’ll be something like 2.2 trillion. At the same time the ECB (European Central Bank) has done 550 billion. So the Euro should be up a lot versus the dollar, but it’s not.

Simplifying it; if I said to you, you’ve got two choices, one is U.S. assets, maybe U.S. bonds, but U.S. equities, or emerging market assets in an environment where we know the real economy is absolutely destroyed. Well, as an investor you’re going to say “’ll buy what the Fed’s buying”. So the foreign investor looks at that and says, “I’ll buy what the Fed’s buying”.

Well, as someone whose been professionally intimate with all the global economy, central banks, etc., have offered up since 1984, I won’t be wading into any equities unhedged in an environment “where we know the real economy is absolutely destroyed”.

Now, stepping back from the emotion, and the debate, around a market that, price-wise, seems to be on the mend after a swift bear market collapse — even in a scenario where the Fed sets the price on every tradable asset in the U.S., where they draw no lines in the sand (although I suspect that, ultimately, political risk/moral hazard will ultimately have them drawing a few): Imagine a world whose “real economy is absolutely destroyed” where, for example, 85% of its consumers reside in emerging markets — markets that don’t house the central bank for the world reserve currency — and where the two largest economies’ leadership are at each other’s throat like never before. How do markets, even — if not especially — in the largest economy ultimately fare when global investors wake up to the realities of such a world?