Note: Once again, I’m tempted to skip this week’s macro update altogether. You and I know it’s going to be ugly, and it’s only going to get worse before it gets better. That said, these updates rival our weekly message as our most-hit blog posts, so I’m compelled to keep featuring our findings herein, even though they’ll simply reflect what we already know…


Well, even though still much of the data are dated — i.e., pre-U.S. shutdown — enough of what we track is sufficiently current to deliver the lowest score (-50) for our proprietary macro index since the heart of the Great Financial Crisis of 2008 (back-tested). Our lowest-ever (back-tested) score came during the Tech Bubble Recession of 2001. 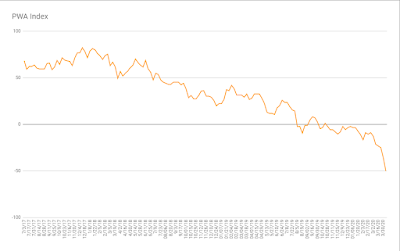 Here are select PWA Index scores (including back tests) plotted along the S&P 500 Index from 1997 to current (see red circles):

So, given the respective ~50% and 57% stock market draw downs of the past two recessions, like I said in the opening paragraph to this week’s message:

“Considering even the best case GDP projections going forward, the notion that stocks have already priced in the economic reality to come is, in my opinion, the definition of faulty. If the market doesn’t leg down to, at a minimum, the recent lows over the next few days/weeks, I suspect we’ll see it when the data that will truly reflect current conditions begin to hit late-April, early-May.”

Here’s a small sampling of the latest (red-shaded areas denote past recessions):  click each insert below to enlarge…

No question that the current recession will produce our lowest-ever score. I.e., every one of the remaining green and yellow areas below, as well as a fair portion of the red, represent data points that have yet to be updated for March: 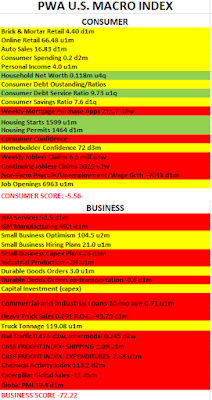 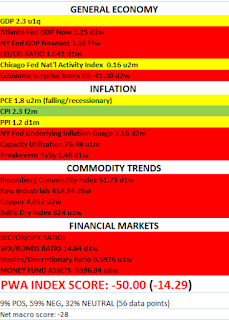 With regard to “a fair portion of the red” above occurring before the virus outbreak, the weakness we were already seeing was indeed reflected in this morning’s jobs report, as the huge -700,000 number was 7 times expectations that were based on the fact that the survey encompassed the pre-U.S. shutdown first part of the month, as well as the fact that today’s report revised the numbers for January and February lower by 57,000.


While the stock market closed a bit lower today, we certainly didn’t see the sort of rout that one would bet such an historic jobs number would provoke. Leaving many analysts to declare — in conflict with my self-quote above — that it was already priced in.


Well, if that’s the case it presumes that “the market” anticipates three things:


1. That this will all be over relatively soon.
2. That the massive monetary and fiscal stimulus will keep the markets buoyed in the meantime.
3. That when it’s over we’ll experience a classic V-shaped recovery.


Well, there’s much optimism in each of those assumptions. The first of course remains to be seen. The second indeed conflicts with the history of major economic contractions, although they are applying historic levels of stimulus. The third presumes much about the human psyche on the other side of what is an historically harrowing experience.

So, I sympathize if you’re skeptical…


As for the state of credit markets, take a look at the color of our financial stress index, also coming in at an historic low (I’ll spare you the accompanying charts): 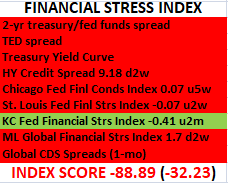 By the way, the KC Fed Index has yet to be released for March. If you need more convincing that credit markets are historically stressed, I featured some additional indicators that we track daily in yesterday’s Charts of the Day.

I know, a lot of “historic” stuff going on here. But rest assured, we’ll be analyzing, assessing and addressing every bit of it as things unfold, and acting accordingly within client portfolios.

Please take care, and have a nice, safe, quiet weekend!