Doing a little charting of past bear markets this evening — history sometimes rhymes — and thought I’d illustrate for you the fractal nature of markets.

Below are 2 graphs of the S&P 500, different time frames: One illustrates the present bear market (all three weeks of it) at 10-minute intervals. The other is the daily chart of the entire 2008 bear market.

See if you can guess which is which:

Interesting, isn’t it? If you guessed the top to be 2008 and the bottom the past three weeks, you guessed right. And while I haven’t seen it yet, it wouldn’t surprise me if some data-mining bull doesn’t trot out similar graphs suggesting that this, the swiftest-ever 30% dip (I believe) in history, represents a bull market that has already run its course — and that we should all be backing up our trucks (and loading them with stocks). I mean it already represents all the twists and turns of modern history’s worst. Right?

Take a look at these two: One represents the first three weeks of the 2008 bear market, the other is the daily chart for the entire nearly-3-year tech bubble bear market of the early ’00s:

You guessed it, or not, the first one represents the first 3 weeks of the 2008 bear market, the second the entire tech bubble disaster.

And proclaim that the worst is yet to come! Hmm….

Here’s one I actually ran across yesterday. The red line represents May of last year through last Friday, the black represents the period leading up to and through the great stock market crash of 1929! 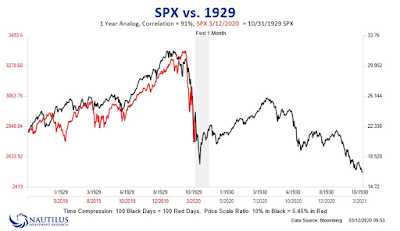 Clearly its presenter was attempting to evoke fear in the hearts of his/her reader.
Well, interesting, but, frankly, not much help — except perhaps in a short-term trading sense (a topic for another day). Trust me, I could, in short order, produce a real one-day chart showing one-minute intervals that eerily matches the entire 1929 crash. But it’s time to move on to more pressing things.