As I type the news out of China remains concerning. While there will be the resumption of some production over the next few days, more than enough of the country remains on lock-down to hit its economy in a big way. Which (the economic hit) explains the willingness to take the huge risk of resuming some production in the face of still no vaccine.

Had I a crystal ball at the beginning of this year and thus foreseen what was to come I would have predicted that global equity markets would right now be in steep correction mode (well, then I would have considered the certainty of massive stimulus coming to the rescue, and wondered). Instead, the U.S. equity market remains at an all time high and Chinese equities are already back to pre-virus levels.

This phenomenon, while I’m sure for some speaks to the strength and resilience of the current bull market, for me it speaks to classic late-stage denial, love for money printing and the recency bias that is forever a part of the human condition.

China, whose total country debt to GDP exceeds 300% has been dumping near-record liquidity into its financial system in response to the virus outbreak. Yesterday, they announced that they are cutting corporate taxes and fees, along with an all-out pledge to support the economy at virtually all costs. Last night Chinese equities screamed 3% higher on that news, and U.S. equity futures (cash market is closed for Presidents’ Day) are trading higher as I type.

As for the U.S., the Fed has essentially made the same we’ll-do-whatever-it-takes pledge, plus the Administration recently announced its intent to offer up another tax cut, as well as a proposal to give tax breaks to consumers who invest in the stock market (the U.S. now runs a near-record budget deficit and record debt-to-GDP itself, and stocks are trading at all-time high valuations by several metrics). The icing on the cake came last week when ex-Fed chair Janet Yellen suggested that it might be a good idea for the Fed to buy corporate stocks and bonds during the next downturn.

That last sentence is utterly remarkable! And it speaks to the complete lack of understanding of, and respect for, how markets are essential to the allocation of resources to their most productive uses. What Ms. Yellen essentially implied, and what central banks virtually the world over are implementing, is that the pain of failure that comes from overconfidence, excessive borrowing and spending, and so on, is not to be felt from this day forward.

My goodness! Should they “succeed” at protecting the world against the next downturn by keeping otherwise failed enterprises operating, well, when we’re talking printing money for the purpose of buying corporate stocks, The Bank of Japan — having been doing that since 2013 — offers up a test case.

When a country is accused of over-stimulating to avoid pain the oft-used pejorative term is “Japanification.” 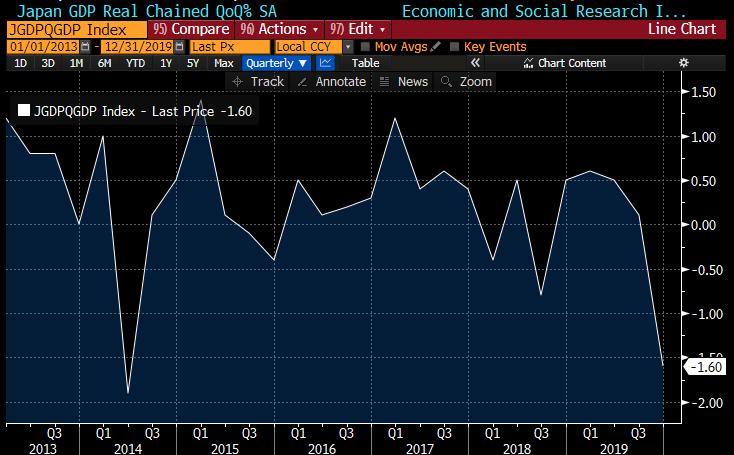 As for its stock market, well, of course the news in November of 2012 of what was to come sent it soaring:

EWJ (Japan equity index tracking ETF) screamed higher by 32% over the next 6 months:

So many problems inherent in economic/market pain-avoidance: Resource misallocation, moral hazard, zombie companies, economic stagnation, on and on…

Of course recessions are painful, and as I’ve illustrated ad nauseam of late the next one will have to clear a massive mess in corporate debt — making it a doozy. But, frankly, it’s necessary if we are to preserve any semblance of “free” markets and the growth, the dynamism, the opportunities, the lessons, etc., they engender…