“…Dow futures are presently trading 340 points lower; which should come as no surprise to anyone.

Frankly, given the fragilities showing up in much of the global macro data that we’ve been pointing to for months, and, not to mention, the underlying leverage in the corporate space, when we factor in the economic realities of the coronavirus we really should be looking at much worse in terms of stock price action.”

The second paragraph was not a prediction, by the way (we don’t do that), it was simply a statement reflecting our macro assessment, which is such that an exogenous shock is likely to do a real number on stock prices.


Contrast the above with our blog post on 12/21/2018, amid the last double-digit stock selloff:

So here we are, trade war (etc.) intact, bull market in tatters! Now what do we do?

Well, we step back, we breath, we turn off the media and we reassess general conditions.

We are forever in search of the signs and signals that say “warning! Recession ahead!” As, typically, bear markets are things of recessions.

So how do we do that? We do that by testing the data that matter against the periods that led up to past recessions. And as we perform that function here today, the character of the data on balance (per our proprietary macro index) does not yet signal recession, and remains notably more positive than it was during the whopping 2011 correction, and slightly better than the 12+% draw down of early 2016, yet somewhat worse than conditions during the 2015 correction.*

*We therefore adopted no defensive measures back in December 2018.

Now take a look at our graph of our PWA Macro Index weekly scores; green X on the date I penned the above, red X now: 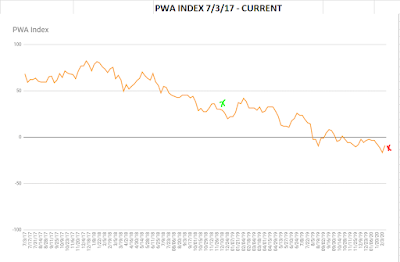 Well, again, during the last episode of swift double-digit declines our macro score was “notably more positive than it was during the whopping 2011 correction, and slightly better than the 12+% draw down of early 2016, yet somewhat worse than conditions during the 2015 correction.” Today, however, macro conditions are not only worse than they were during the 12/2018 episode, they’re notably worse than the 2011 and 2015/2016 periods referenced in that 12/21/2018 commentary as well.

We have, therefore, now adopted a more defensive asset mix in all client portfolios…


As you probably know, today the Dow logged its largest one-day point drop in history! On a percentage basis, however, not even close.

Positions in the green:

Of course, and I can’t emphasize this enough, one day never a trend makes! And the above positions (save for the put option) do not always go up — or stay flat — when the market goes down, or go down when the market goes up. We own each for different reasons, but one thing they each have in common is that they possess relatively low correlation to stocks. Which is what we want given the current environment!

Note, if you check your stuff on line and your portfolio’s move today wasn’t quite consistent with the above reference to our core mix (give or take, depending on when you look and what happens between now and then), it’s because due to tax constraints specific to your situation when we rotated, you’re not quite there, or your (or, say, your kids’ or grandkids’) portfolio isn’t large enough to capture every position. We manage modified allocations for those smaller accounts…