Charts of the Day: Well, actually, more of a free trade rant!

As the rhetoric heats up over trade, please remember, a “trade deficit”, actually a “current account deficit” is only meaningful in accounting and politics. In the real world, we absolutely know that no country would ever allow the trading of its resources and the fruits of its labor for goods and services of lesser value. Meaning, for example, the Chinese would not be willing to enter into a deal wherein they send us $500 billion worth of stuff during the year in return for a mere $150 billion worth of stuff, plus a bunch of green pieces of paper. Not unless they were certain that those green pieces of paper could be used to acquire stuff of sufficient value to make the entire deal work for them. Oh, and by the way, those green pieces of paper I’m referring to — those U.S. dollars — would be claims against U.S. stuff.

So, we buy stuff from China, exercising our freedom to obtain the goods we desire under the best possible terms — allowing us to keep more of our hard-earned income with which to send our kids to college, retire at a comfortable age, enjoy the amazing venues this country has to offer, pay to watch a champion boxer take on an MMA champ, and so on — while China sends us back the green pieces of paper in return for stocks, corporate bonds, treasury bonds (funding our govt spending and keeping interest rates low), real estate, private businesses and so on, which shows up on the ledger as our “capital account surplus” (which I suppose is important in accounting, but apparently not a politically expedient phenomenon).


I know, some of you might say “we don’t want Chinese folks owning American businesses”. Oh, how I beg to differ! For one, if they couldn’t, I promise you, the quality of your kids’ education, the richness of your retirement years, your capacity to enjoy what America has to offer, and the ability to pay to view an over-hyped fight (or for the hypers to pay for the over-hyping) would be diminished exponentially. For you would lose access to the global market’s comparative advantages in numerous goods and services and, thus, be forced to obtain much of what you want and need (if you could even get it) under severely compromised terms (i.e., stuff would be very expensive — and limited). Meaning, the Chinese, in my example, would not take those green pieces of paper if they, or someone else they transact with, couldn’t put them to good use.


Also, and critically, we don’t want to limit the market for American assets; assets owned by free and industrious American citizens who would put those returning dollars (capital) to their best use. Think of it this way, before the sale of a business to an international buyer, “we” had the business. After the transaction “we” still have the business — still producing its wares and employing Americans as it did before — and “we” now have an increase in capital with which to put to productive use elsewhere. Again, we absolutely do want the world market bidding for our assets, it makes us hugely richer, I assure you!


Oh, and you individual investors out there, imagine how your stocks would perform (not to mention how limited your options would be) in a market closed to outside investors.


Wow! I got a little carried away this morning. Honestly, I was just going to offer up my charts of the day, which have to do with how much U.S. oil the Chinese have been buying lately: 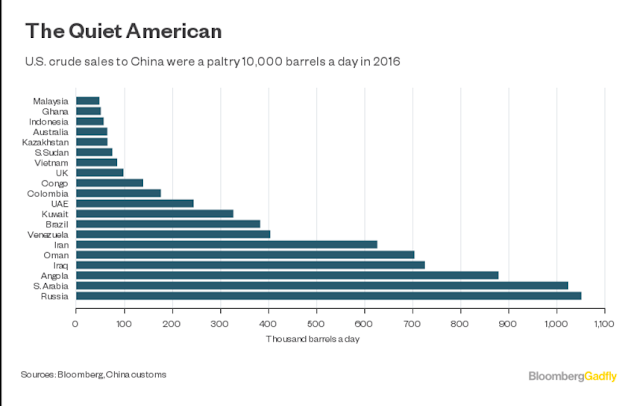 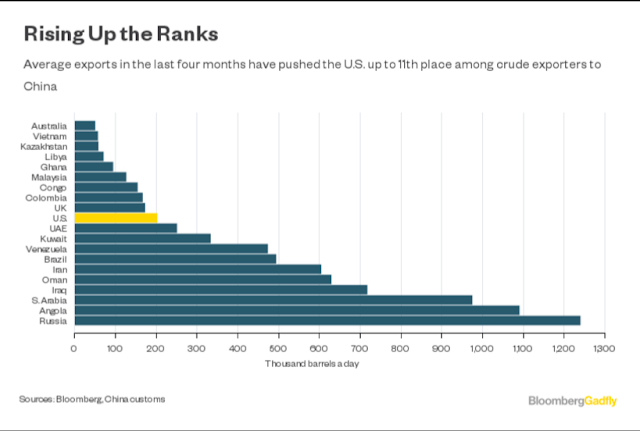