This Week’s Message: Eeyore Would Be a Star!

In two recent blog posts I touched on the seemingly popular notion that a market at all-time highs is doomed to collapse under the weight of its all-time-highness, and on the dire prognostications of a gentleman who — despite his dismal track record — receives a visionary’s welcome by the mainstream financial media.

As regular readers/viewers know, we prefer to let the somewhat slow-moving, generally boring and often redundant data do the talking. No wonder CNBC never calls us for an interview!

With that in mind, I’ll see if I can’t lull you to sleep with a spreadsheet featuring our view of a few select technical market indicators, along with an up to date look at the economic data we track each week — after I set the stage with a few stunning charts.

While more volatile, and less instructive from a longer-term standpoint, the relationship between price and the 50 day moving average says things as well:

The simple slope of the 200 day moving average says volumes about the strength of the prevailing trend:

The monthly Moving Average Convergence Divergence (MACD) indicator — with its occasional exception (false signal) — does a good job of signaling long-term trend reversals. The white line moving above the red is bullish, moving below is bearish:

Applying the above to our core ETFs colors our spreadsheet as follows:

Yes, as it relates to equities — save for energy, telecom and real estate investment trusts– that’s the definition of a bullish look. The last two entries are ETFs tracking treasury bonds and the price of gold.

So, technically, the broad stock market appears to be in good shape, at least for the moment. But what about the economic and fundamental backdrop? Is it, overall, conducive to growth going forward?

Here’s a look at some of the data we track each week, using the same format (had to break it up to make it fit): 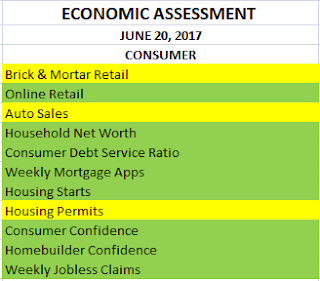 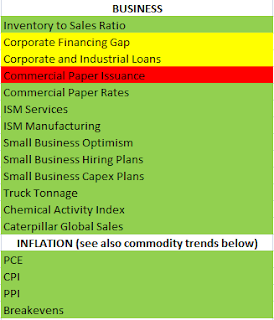 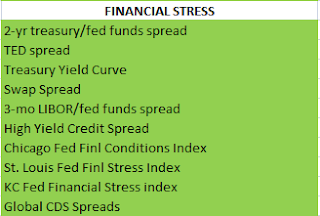 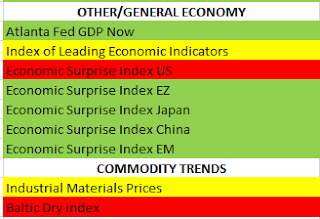 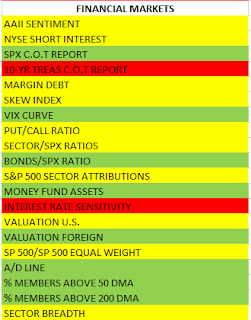 Well, for now anyway, the data just don’t seem to support a doom and gloom scenario. I wonder what the same data would’ve signaled as the market was about to roll its way into the last bear market?

A simple look at the chart might’ve had one interpreting the action around March 31 2008 (red arrow) as a time to accumulate stocks after a healthy correction (as the S&P 500 was about to form its 3rd consecutive higher low off of a potential short-term bottom hit on March 10).

Ah, but that would’ve been seeing the market through rose colored glasses. Here’s the move from the red arrow to the ultimate bottom on March 9, 2009:

And here was the technical setup at the time (any colorless rows reflect data that wasn’t available in March 2008):

Save for DEM (dividend-oriented emerging market ETF [which rolled over shortly thereafter]), gold and bonds (the last two rows), that would not be your bullish scenario by definition! Gold, by the way, eventually rolled over with stocks as the bear market unfolded.

And here was the economic and fundamental backdrop: 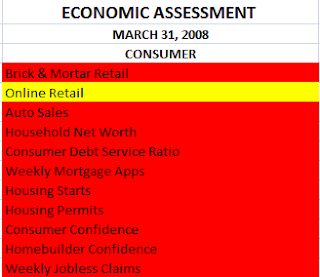 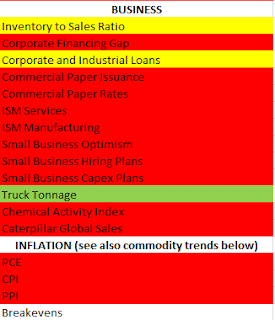 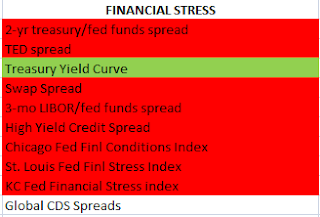 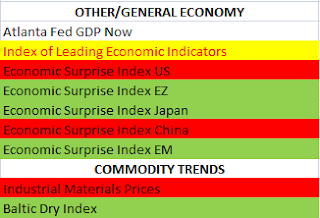 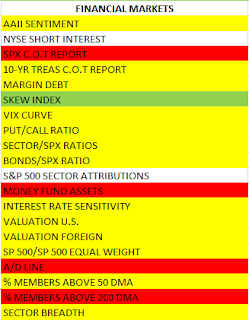 Clearly, the doom and gloomers of early 2008 had reason. But to sound the same alarms amid the present-day set of data looks to be more about attention mongering than it is truly thoughtful observation. That said, there’s no indicator that can always predict what’s to happen next (far too many moving parts) — so those Gloomy Gus’s could indeed get “lucky”.

The best you and I can do is assess probabilities based on facts and data, and act accordingly, while always keeping an open mind!

All this makes me think of dear old Eeyore. The second to last quote will make him a star if the financial media gets ahold of it!

Have a happy weekend!
Marty