This Week’s Message: Are Stocks Dangerously Expensive? — AND — Highlights of our in-house study on the financial sector

Here’s a look at our tracking of current-year price to earnings ratios for the S&P 500 (spx), major U.S. sectors, and much of the rest of the world — along with our target allocation percentages:   click charts to enlarge 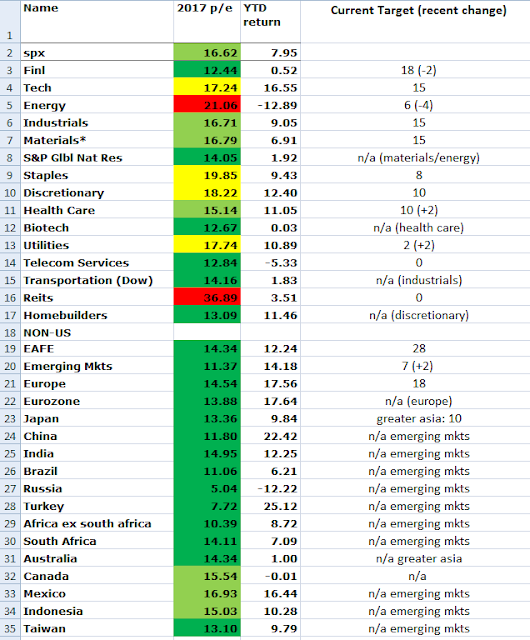 Before we get into this week’s message I need to point out that the above represents price to earnings (P/E) ratios based on this year’s consensus estimates among analysts. Typically, current year P/Es are more attractive (lower) than those based on prior 12 months. In fact, there’s much commentary floating around today that suggests — based on the latter — stocks are presently very expensive.

While the trailing 12-month S&P 500 P/E of 25.5 is a lot higher and scarier than the 16.62 present year estimate, historically-speaking, it’s not a number that should send one ducking for cover. Per this graph courtesy of Chris Ciovacco: 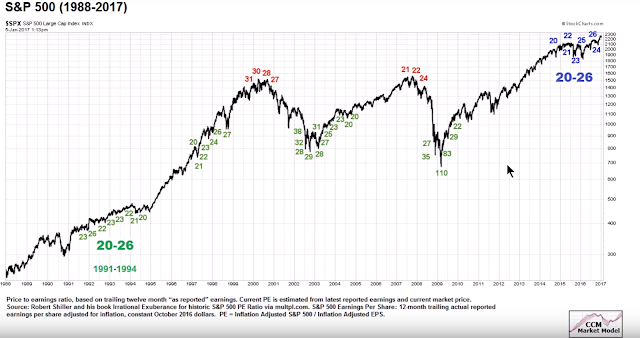 As you can see, stocks can move measurably higher off of mid-20, and much higher, P/Es. Of course, as evidenced by the 2007 peak, they can crash off of P/Es in the low 20s.

Bottom Line: It’s the forward prospects for the ‘E’ (earnings) that ultimately counts.

Back to our spreadsheet:

While we can certainly delve into the huge post-election run in the sector, on anticipation of deregulation, and how the political conflicts we’re all too aware of have since gotten in the way, let’s not. I mean, sure, politics can indeed get in the way (and, thus, have to be considered), nevertheless, our sector allocations have much more to do with the economic cycle and with technical setups than they do political machinations.

We devoted the beginning of last month to a three-part series on the economy (here, here, and here), which painted an optimistic going-forward picture. A picture which, as I type, remains intact and favors our present sector mix. As for the technicals, with regard to the U.S. financial sector ETF (xlf) we most use, the near-term look has definitely broken down — which makes sense given this year’s sideways move:

In the interest of your time, I’m going to assume that you’ve been watching the videos and, therefore, you know what those colored lines represent.

Ah, but remember, we’re a global investment shop: That 18% target also represents positions in non-US financial institutions. In fact, EFA (the developed market ETF we most use) is 21% weighted to financials and, as it turns out, financial stocks outside the U.S. are having a banner year. That 21% weighting has been the largest contributor to EFA’s 14.34% year-to-date result, itself returning 12.37%:

So, now, this divergence between the performance of U.S. and non-U.S. financial stocks begs for what we call an intermarket analysis.

The following are highlights of a study we performed yesterday on the historical relationship between U.S. and European financial stocks:

The question being: is such a divergence (in direction) between U.S. and European financial stock performance the norm? The answer: No, not at all.

Here’s a comparison going back to the inception (2/3/2010) of the European Financial Index ETF (eufn) we used to compare:

While the U.S.’s  financials have measurable outperformed Europe’s (until recently), you can see that, for much of the time, they’ve moved in the same direction. In fact, over the longer-term, their correlation coefficient (a measure of the extent to which two securities move together) is a relatively high (positive) 0.73 (1.00 denotes perfectly positive correlation):

On a year-to-date basis, however, the correlation has been dramatically the opposite (-1.00 denotes perfectly negative correlation):

This is the stuff statistical arbitrageurs dream of (“statistical arbitrage” [also called “pairs trading”] is a fancy term for the practice of identifying two securities that have temporarily veered from their normal price-trend relationship. In theory, opportunity lies in the inevitable reversion to the norm. Meaning, one stands to make some money betting on the presumed inevitability that the underperformer will ultimately catch up and/or the outperformer will ultimately catch down going forward). Of course the idiosyncrasies of our study’s two subjects could — in this example — seriously mitigate a trader’s profit potential.

Along with confirmation that this year’s blah U.S. financials’ performance may indeed be the result of near-term political headwinds (as the rest of the world’s financial stocks seem to be moving in sympathy with economic trends), the above speaks to the importance of global diversification.

Bottom line: For now we stay the course.