A Blah Energy Picture and Its Silver Lining

Energy stocks (10% of our typical equity portfolio) have been a tough place to be — in an otherwise favorable market — so far this year. The setup, from a purely cyclical standpoint, makes a lot of sense to me. The “tough place to be” aspect clearly speaks to the fundamental supply setup. However, the setup from a fundamental demand standpoint is bullish and speaks to the optimism screaming from much of the recent economic data. 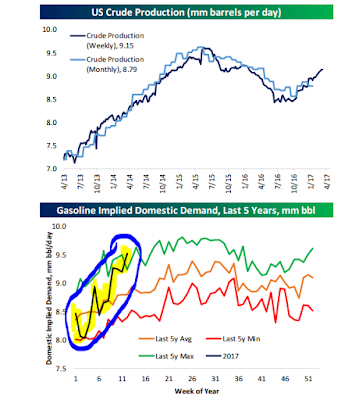 And it’s got to be driving OPEC (as it efforts to get the price higher) batty.

Bloomberg: As OPEC Cuts Output, U.S. Rigs Rise to Highest Since 2015: Production cuts by OPEC and its allies have had the unintended effect of spurring a revival of drilling in the U.S. Rigs targeting crude and natural gas rose by 15 to 824 this week, the highest since September………..

Back to the “tough place” aspect of energy as an investment destination: While the supply/demand setup, per the above, has me fundamentally scoring the sector neutral (say, a 5 on a 1-10 scale), the chart below has me technically scoring the long-term setup a 5 and the short-term a 6/7:

The silver lining to what makes for a basically blah setup for the sector is the overall stimulus effect low to moderate energy prices have on the rest of the economy. I.e., lower gas prices allow for more trips to the mall, to Amazon.com, to car lots, to model home sites, and on and on…