On Wednesday, on cue, the Fed raised its benchmark interest rate a quarter-point. However, the members effectively signaled in their commentary — and Yellen in her press conference — that while things are improving, they’re doing so at a pace that does not warrant what would be deemed aggressive monetary tightening.

So it’s the proverbial Goldilocks market scenario, right? Well, not necessarily. You see, the interest rate stuff, bonds in particular, really shouldn’t rise (in price, with yields lower) amid an economy that — despite the Fed’s somewhat muting commentary — looks to be blossoming into the latter, presumably inflationary, stage of the cycle. So why did they? Well, I suspect the following had something to do with it:     click to enlarge…

The above charts the positions taken by speculators in the treasury futures pit. Traders are net short (betting on a fall in treasury prices [rise in interest rates]) when the histogram’s bars fall below the center line. As you can see, they were hugely net short going into this week’s meeting.

When one bets that a security’s price is going to fall (shorts [sells] it), if one happens to be wrong and the price instead rises, one can lose massive quantities of money. To exit a short position (to cover) one has to buy the security. And when that buying occurs en masse, because speculators were caught on the wrong side of the trade, the security’s price — presuming there are few, if any, sellers willing to immediately relieve those traders of their burden — can rally big time.

So why might traders get cold feet on their view of the direction of treasury prices amid a higher Fed funds rate? Well, take a look at how treasuries traded when the Fed raised it back in December 2015: 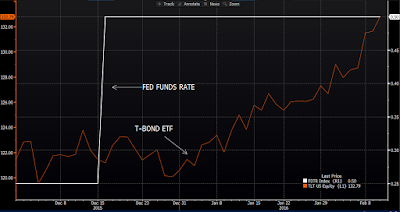 They actually began rallying hard just a few days after. That’s an ugly scenario for the shorts.

How about when the Fed hiked in December of last year? 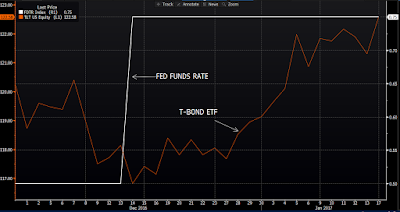 So, why, with recent history as their guide, were speculators so resoundingly short treasury bonds going into this week’s Fed meeting to begin with? Well, it’s because this time around the economic data truly supported a rate hike, while the setup during the prior two wasn’t as convincing. I.e., higher rates, when the economy’s not on firm footing (which was the worry ahead of the previous two hikes), could halt a recovery in its tracks — a notion that would indeed send treasury prices higher/yields lower.

But, again, it feels different this time, per the following few titles from my “Current Trends” file:

So, absolutely, short treasuries, it makes sense. Unless, that is, Janet Yellen and company temper the rate hike with soft language. Which, per paragraph 1, is precisely what they did: Sure, justify the hike by citing what’s good about the economy, but tell markets that there remains enough uncertainty to go easy and remain relatively “accommodative” for the time being. Well, that softer than anticipated tone along with the reverberating pain of the past two Fed-induced bond rallies was enough to send the shorts scurrying for the fences; that is, to buy treasuries in a panic, pushing up their prices.

As I type, it’s one trading day later and here’s what happened to the interest rate sensitive stuff after a little dust-settling: Bonds fell half a percent, REIT’s tanked -.86% and utilities were hammered by -1.85%. Hmm…

So,now — after, I presume, the panic-stricken speculators have closed their positions — is, given yesterday’s action, the market making sense? I mean, is it reflecting economic reality? Of course we can’t know for sure. In fact, we shouldn’t even attempt to know for sure — per my close to Tuesday’s blog post:

Jesse Livermore, whose story is arguably one of Wall Street-history’s most fascinating, and instructive — he literally made millions in the early 1900s when he followed his own rules, and blew up time and time again when he didn’t — spoke to the wisdom that ultimately told of his own undoing:

The reason is that a man may see straight and clearly and yet become impatient or doubtful when the market takes its time about doing as he figured it must do. That is why so many men in Wall Street, who are not at all in the sucker class, not even in the third grade, nevertheless lose money. The market does not beat them. They beat themselves, because though they have brains they cannot sit tight.

While we can’t know that this go-round the stuff that makes sense — given the perceived conditions we find ourselves in — will ultimately be the stuff of reality, one thing’s for sure, in the near-term the market will do whatever it wants, for whatever its reasons.

My best guess is — given the present setup — that a little (or a lot) selling into the news may prove healthy in the weeks/months following it.

Okay, so we can guess, but let’s not allow our short-term market guesses to guide our long-term investment decisions…