Some client comments over the past week:

Let’s tackle them one at a time:

1. “Nervous”… Sure, what goes up eventually comes down.

2. “Can’t go higher”… Of course it “can”. Per number 4 below, going higher, given where we’ve been, is a case one might make. But I ain’t predicting anything.

4. “The market’s going crazy”… Well, the market actually was under-participated in, in fact there’d been a net outflow of capital (less demand), while companies bought back shares (less supply), for several years. It would make sense that — when there’s some relief of whatever was keeping folks out of the market — prices would shoot up when fresh demand met less supply.

5. “Things are looking really good!” Well, the market (certain sectors, that is) has been rising, and, unless you’re short (betting on a fall), that “looks” really good.

So, in Tuesday’s video I showed a period in recent history that was characterized by multiple all-time highs. A period that would’ve severely punished the long-term investor who suddenly succumbed to numbers 1 and 2-style short-term thinking. Truly, number 3 (trend is your friend) is an adage worth respecting.

Okay, so what’s really going on? Is it Trumphoria? Is it the coming infrastructure spend, the prospects for lower corporate taxes, for less regulation? Or would we be here either way? Well, as you might recall, my commentaries leading up to the election were painting a pretty good setup (for what it was worth) going forward. But, sure, it indeed seems like something’s pulling forward some gains that might’ve otherwise taken longer to realize (the effects of which I’ll be charting for you in coming weeks/months).

Okay, so what’s really going on? Well, actually, at the ground level — while this doesn’t answer “why” (but your question is “what”) — that’s easy: It’s kinda like #4 above. At the end of the day, stocks go up and down based on the convictions of buyers and sellers. For whatever reasons, the bulls have a stampede of conviction under their hooves at the moment. Clearly dwarfing the present level of conviction among the bears. And, frankly, that’s virtually all you need to know to know that the market’s present pace will not last forever. I mean, the bulls will get tired and, at a minimum, the bears will effectively hold back the stampede. This will come in the form of a sideways move (first chart below) where the bulls recoup a bit while maintaining sufficient strength to keep from losing momentum:       click charts to enlarge……. 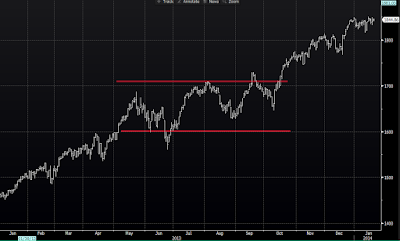 Or a decline, where the bulls pull back to a support level where reinforcements join the cause and mount a successful attack that takes them through the bear’s previous area of resistance: 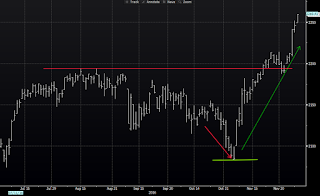 Or, lastly, an outright (and painful) retreat where traitors (defecting bulls) join the bears and push the few remaining bulls past successive support bases where they pick up a small platoon at a time before amassing sufficient forces to mount their next successful attack: 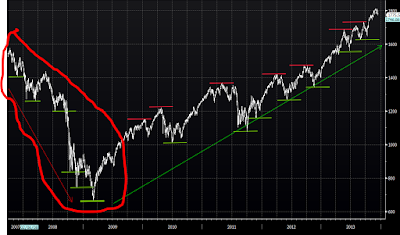 So will there be signs that tell us when the bulls are tiring and the bears are ready to attack? Well, sometimes yes (the stuff of future video commentaries), sometimes no (the all-out ambush). But, you know, that’s not an issue for you and me. Because, while you and me might be interested in the above — if only to help explain the market come Christmas dinner — what we’re really into is owning the companies that’ll be producing our next cell phone, our next car, our next pair of tennies, our next basket of groceries, the fresh pavement that’ll be spread over America’s roadways, the machinery that’ll be moving it around, the banks that’ll be financing whatever economic activity is to come, and on and on and on, without fretting over the inevitable market volatility along the way, right? Say right…

Have a wonderful weekend!
Marty