This Week’s Message: Obsess With Process — AND — Beware That After-Dinner Cigarette!

Founder & Co-Chief Investment Officer
Last week we touched on the continuing (as of this week) selloff in the bond market. I warned of the dangers of owning bonds in a rising inflation/interest rate environment. I also mentioned that we haven’t ventured there in quite some time. What I failed to mention is that had we ventured, or, I should say, stayed, there, at least until very recently (and a few stints along the way), our clients’ portfolios would’ve realized better results on the fixed income side of the ledger. Yes, generally speaking, owning a few select bonds over the past few years yielded better results than the cash and short-term CDs we clung to.

So fire me! But before you do, hear me out. I’m going to see if I can’t convince you that not being in bonds while they outperformed cash and short-term CDs was indeed the right decision to make. And I’m going to start by borrowing from James Montier’s wonderful little book The Little Book of Behavioral Investing:

People often judge a past decision by its ultimate outcome rather than basing it on the quality of the decision at the time it was made, given what was known at that time. This is outcome bias.

Imagine you are asked to rate the soundness of the physician’s decision process (not outcome) in the following case.

A 55 -year old man had a heart condition. He had to stop working because of chest pain. He enjoyed his work and did not want to stop. His pain also interfered with other things, such as travel and recreation. A type of bypass operation would relieve his pain and increase his life expectancy from age 65 to age 70. However, 8 percent of the people who have this operation die from the operation itself. His physician decided to go ahead with the operation. The operation succeeded.

Evaluate the physician’s decision to go ahead with the operation, on the following scale:

Now imagine the same task except that in this alternative setting, the operation was unsuccessful and the patient died. Of course, the correctness of the physician’s decision should not be a function of the outcome, since clearly the doctor couldn’t have known the outcome before the event. However, when people are given scenarios such as these the decision is always rated as much better if the outcome is good.

So let’s say you’ve been around the investing block a time or two. You know from your studies and, most importantly, your experience, that when interest rates are historically low, bond valuations are historically high. And you’ve watched as investors and, alas, investment professionals become lulled by the siren song of yield, and the promises of steady principle put forth by the purveyors of bonds and bond funds, only to all at once wake to plunging values as the inflation bell tolls for thee who knew not the risks. Well, in this instance, you would be me…

Like Montier’s physician, whose decision hinged on his/her assessment of the patient’s symptoms, our decision to alleviate our clients’ fixed income allocation of interest rate risk was based on the symptoms portrayed by an economy sporting a virtually zero cost of money (interest rate). Any other advice, in my view, would be akin to a doctor discovering that the patient’s arteries are clogged to the point of offering no escape route, then recommending that he jog over to the pizza parlor and load up before heading home for an after-dinner cigarette. Sure, he could very well survive — perhaps the doctor would prescribe a few meds that’ll keep him chugging (goes good with pizza) for a few more years — but I suspect that you and I would score such advice a -3 on Montier’s scale above.

Here’s a look at how a portfolio of treasury bonds reacts to rising interest rates: 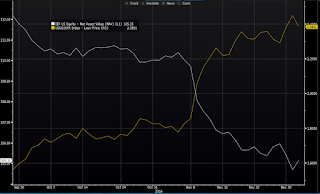 Oh, and that’s just for the past month.

So does this mean that the bond bubble is finally getting pricked? Does it mean that the shocked investors who’ve yet to abandon their bonds stand no chance of getting another chance to bail? Absolutely, unequivocally NO!

Well, of course, it could mean that, I just can’t know for sure. Nor can anyone else, I PROMISE YOU! But we can know the risk. We can know that bonds will always be among the most interest rate sensitive asset classes in existence. We can know that when interest rates are at history-of-mankind lows, that bonds are ultimately (perhaps after central banks run out of ammo) going to be very volatile things to own. And we can, therefore, keep that portion of our portfolios to which we assign stability of principle as the primary objective away from such a potentially volatile scenario.

Now, I need to be very clear; volatility is never a problem for successful long-term investors (with a process*) — but of course I’m referring to that portion of their portfolios to which they assign growth of principal as the primary objective. That portion will forever, by its very nature, be subject to volatile scenarios.

Again, this (and last) week’s message is about the portion which is meant to serve our clients’ (particularly our older clients’) portfolios (and, frankly, their emotions) with a bit of a buffer.

We obsess with outcomes over which we have no direct control. However, we can and do control the process by which we invest. As investors, this is what we should focus upon. The management of return is impossible, the management of risk is illusory, but process is the one thing we can exert an influence over.

Okay, after all that, if you still want to fire me, go ahead. I’ll go quietly 🙂

Have a wonderful weekend!
Marty