Quote of the day: A hundred-point move ain’t what it used to be…

Yes, the market’s enjoying quite a run. But I get a sense from talking with folks that they view it as some breathtaking meteoric ascent, particularly when we’re talking the Dow. The thing is, at nearly 20,000, per Bespoke Investment Group below, a 100 point gain just ain’t what it used to be:

Below is a chart that shows the impact of a 100-point Dow move in percentage terms based on where
the index is trading in price. This is obviously common-sense stuff, but we thought it was worth highlighting
given that the index is quickly approaching the 20,000 mark. From a psychological perspective,
a 100+ point Dow move still seems like a big gain or decline in the minds of most investors, but the reality
is that at these levels, the index needs to move 200+ points to be categorized as a “big
move.” Over time the psychological adjustment will be made, but for now it’s likely that investors are
viewing daily Dow point moves as more impactful than they really are. 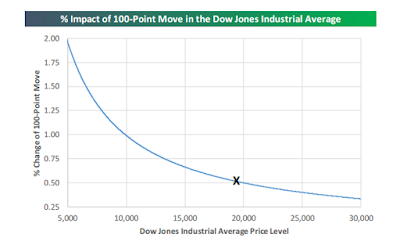