For this week’s message I was originally going to chart for you the market last year at this time versus this year, as — like today — we were then staring down a pending Fed rate hike. However, today’s interesting action in the wake of a news headline inspires a different conversation. I’ll do that year on year comparison sometime within the next few days.

In yesterday’s video I mentioned that I suspected that the S&P 500 would break below its present trend line and test the 2120 (orange line below) level perhaps a few more times going forward. I also mentioned the 2100 level (horizontal white line below the orange) as maybe being a line in the sand:
click to enlarge…

Well, I was in my car this morning when I heard the news regarding the FBI and one presidential candidate’s email activities. Based on how the trading’s been relative to election probabilities, it wasn’t hard to predict that the market would not greet such news warmly. As you can see below, before the news the S&P was up quite nicely. Notice the reaction, and notice how support held at that orange line: 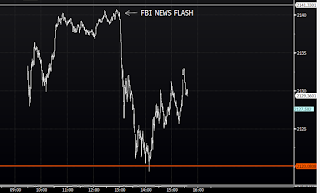 Here’s the yearly chart which shows the S&P breaking below that trend line (not to an extent, however, that would inspire me yet to redraw it) and, again, bouncing off of 2120: 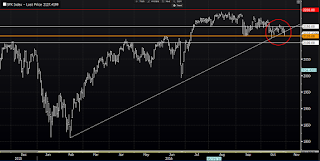 My point? The short-term market dynamics are heavily influenced by, well, short-term thinkers whose activities (in this case, the buying at a recent support level), in and of themselves, have little to do with the fundamentals that you and I would consider when making our long-term investment decisions.

And while my view that there are a lot of remorseful traders who recently sold the 2100 to 2120 level (only to watch the market leave them behind) may have been supported by today’s action (they got another chance to get back in), there’s absolutely no guarantee that the next test won’t fail, leaving the market searching for a level of support somewhere below those lines on my charts. Which, unless the real world data inspires otherwise, would not have us altering our present long-term sector/regional allocations. I’ll keep you posted…