I’m getting some push from subscribers to weigh in more on the political environment and its impact on the markets. So, hesitatingly, I’ll do so. And, as I do, I want to make very clear that I will keep my commentary to my perspective on what the market is signaling. I.e., nothing herein should be viewed as an endorsement for either candidate:

So I worked late last night, as my wife was babysitting the grand kids and we planned to watch the debate, via recording, together. So, being careful not to allow any news alerts, I kept a couple of screens live on my desk: the Mexican peso future contract and U.S. stock index futures.

Within the first half hour of the debate, it was clear to me that Mrs. Clinton was making hay. The peso was rallying hard and stock futures went from negative to positive: 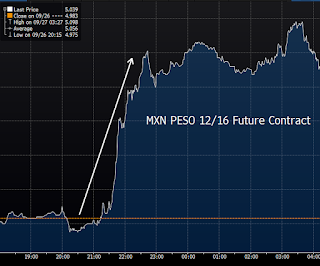 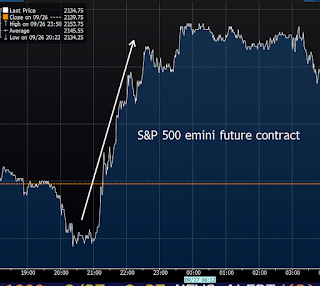 Well, as for the peso, it should be obvious.

As for the stock market, well, it’s complicated. Watching the debate later, Mrs. Clinton opened by citing a few of her less than market-friendly objectives. Not that Mr. Trump’s hard stance on trade and immigration is what you’d call pro-market by any stretch, but he does aggressively talk corporate tax and regulatory reform; things supply-siders and most market participants, I suspect, agree are sorely needed. While Clinton proposes a veritable litany of benefits that are to be funded by raising taxes on “rich” folks, alive or dead.  Hmm…

But here’s the thing, Trump effectively (for now anyway) nullifies any potential market coziness with the protectionist rhetoric that, I suspect, got him (in no small measure) to where he is today. Interestingly, Clinton sounds a decidedly protectionist tone as well, but her history as a politician doesn’t entirely jibe with her campaign stance (that said, Trump’s history as a businessman doesn’t quite jibe with his political stance on trade either…). So, in terms of international trade relations, I think, clearly, “the market” is more comfortable with Clinton — or, you might say, “the market” doesn’t believe that she’ll be nearly as hard on trade as Sander’s supporters (for example) require her to be — while “it” apparently fears that Trump is more committed to the narrative. In terms of her hitting the rich, well, she’s rich, although I do see her truly attempting to push up the rate on the top tax brackets.

Beyond the election, one initiative both promote and, clearly, the market likes, is a big future push for fiscal stimulus via infrastructure investment.

Bottom line; the market likes certainty, so, for now, and for lack of a better term, it’s the devil you know.