This Week’s Message: What We Know – And – What’s Not To Like?

This week’s main message will be short and sweet. It’ll essentially be me doing a little thinking out loud…

I totally get the bullish feel in the equity market today:

Well, it depends on who you are, and what you believe about how healthy economies function.

If, in fact, you believe that economic cycles, with their checks, balances and corrective functions in place, are actually very healthy phenomena, then you lament the utter artificiality in today’s macro and market setup.

You sense that what’s rosy on the surface rests above a smoldering pile of public and private sector debt, that, were it to erupt — were the ultra-thin tectonic plates keeping it at bay to shift — it would essentially take no prisoners from the crowd that actually believes that academically-endowed politically-appointed economists indeed possess the magic that will forever overcome economic nature…

Of course, lamentations aside, one can’t let one’s understanding of economic nature keep one from exploiting the opportunities that arise when policymakers essentially panic… and, therefore, print… and borrow… and spend… and attempt to manipulate markets…

I just got off the phone with a friend who, toward the end our conversation asked “so what’s your take?”

I essentially told the rosy story I penned above, mentioned the commodities and the sectors I like, then went on to explain that underneath it all is what looks to me like a dangerously fragile edifice.

I explained how, should sentiment, for whatever reason, suddenly shift, things could get exceedingly ugly in a hurry… and while investors should absolutely position according to where the money will be flowing in the months to come, they should also hedge their portfolios against the risk of the “exceedingly ugly” ultimately playing out…

So, in a nutshell, that’s the present setup, as we see it, folks.

Of course we’ll continue to add much texture and nuance herein as things play out in the days/weeks/months/years to come.

I.e., We’ll explore the risks of inflation, the dynamics and the effects of currency and interest rate volatility, and much much more, as the powers-that-be attempt to stay on the narrowest of paths…

In the meantime, speaking of asset bubbles, I’ll leave you with this visual of Nobel Laureate Robert Shiller’s widely-followed CAPE valuation metric: 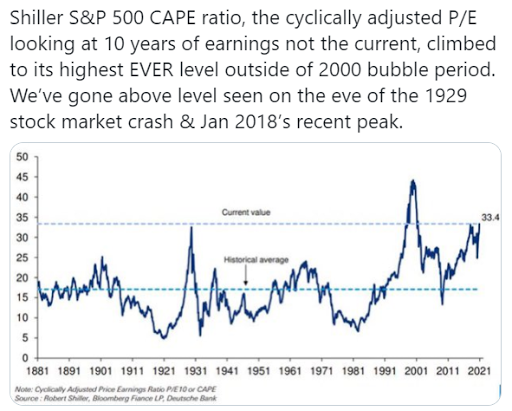